A Message From My Mother To The World

My son (ERFAN) was diagnosed with the cerebral palsy when he was about one year old.
When he was born everything was ok! According to his pre-mature, the doctor said that we should send him to another hospital, where there is equipped with many modern incubators and he should be fine in there. They took an ambulance and put my son in and my husband accompanied him. On the way to hospital, the nurse shouted that my son couldn’t breath and his color is changed, and asked the other nurse to hand her the oxygen tank, and a few second later she was shocked by the tank that was empty, and turned to the driver and said, drive fast, he can not breath. 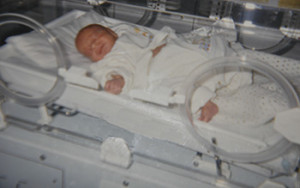 when they reached to the hospital my son couldn’t breath. His color turned blue, and the doctor was very disappointed and told my husband that there is a little chance for him to survive, he said that, I can inject a drug which may help his lung to react, but the chance is less than 20%. my poor husband accepted and said do whatever you can.
After that injection, surprisingly, my son could breath,……. but…. he had oxygen cut,… CEREBRAL PALSY….
the word was meaning less to us at that time, but day by day, we heard many many times: CEREBRAL PALSY….
when he was 9 months old, we noticed that he is not moving like the other kids, his fingers were stuck to the other fingers, he couldn’t sit, his eyes were crossed, and his legs muscles were stiffed. He was inactive, and just laying down in his bed. 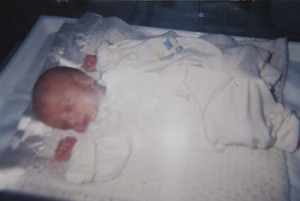 by the time he was a year old, we took him to the neurologist for evaluation. He said that oxygen cut affected his brain and limited his movement and this would stay with him for rest of his life. He would be dependent on others, he can not do his jobs by himself. We asked the doctor if anything we can do to help him to improve? He said;” no, just pray for him, he is not a normal kid, if you think that he can play a piano, or play any sports, or he can use computer’s keyboard, YOU ARE WRONG. YOU SHOULD ACCEPT THIS SITUATION AND LIVE WITH IT.
When I came out of his office, all my hopes and dreams for my newly born son were disappeared. I was so confused. I didn’t know what to do and how to cope with the new situation.
We started to search about what CEREBRAL PALSY is. First of all we took him to the ophthalmologist. His diagnosis was Strabismic. 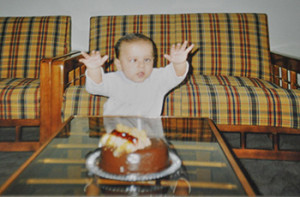 A week later his eyes were operated.

As the surgeon told me prior to the operation, he did not have any bandage on his eyes, and from the beginning he could see. First of all he didn’t recognize me, and cried, but when I talked to him and gently touched his face and his neck, he stared at me and stared. I saw his very beautiful eyes, they were light brown. The surgeon and the nurses were looking at us and were smiling. 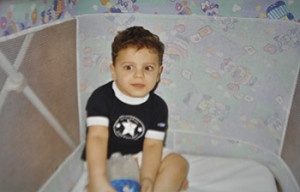 After six months later, I took a ticket and went to Switzerland, where my mother and my sister were living. I took my son to a team of physician, neurologist and psychologist for consultation. They confirmed the diagnosis.

They told me that he is blessed because oxygen cut did not affect his intelligence, and suggested to have a physical therapy for his fingers and his legs. I thought that there is no one to help my son and I.
I was his mother, and I could do something. I tried to pass many courses regarding what cerebral palsy is, and its therapy, physical therapy, finger therapy, and massaging the stiff muscles. I had a full time job. I spent and used every minute of my life working on his body.
I was in love. My working on his hands and his legs, with so much affection, gave me more energy and love. After any massage, he took my hands and kissed them. Day by day I was motivated to help him to overcome his limitation. I promised my-self to beat his limitation as far as I could. I knew that he should be in a group of normal kids to see his limitations and to overcome them. My husband and I quit our jobs, sold one of our properties, and open a pre-school and kindergarten, called:
Bagh-e-Minoo. In Farsi, Bagh means Garden, and Minoo means Heaven. We chose this name because it was true, where ever the kids are involved, there is heaven, because the truth is that the kids are so pure and innocent, and they should be placed in heaven.
At that time my son was 2 years old.
Caring, nurturing, and supporting the kids were all of our goals. We did not have any experiences managing pre-school, and pre-schoolers. But we could. Everyday we involved ourselves in learning and studying. The more we study, the more we were successful. After 2 years, my son put the wheelchair away. He could walk, but not as fast as the normal kids walk. I took a private swimming, piano, karate, and painting instructors for my son. I should say that these facilities were for all of the kids.
By the age of 4 and a half he could swim. By the age of six he could paint, by the age of seven he could play piano and touch the computer’s key-board. But with all of those, he was not as fast as the other kids were. His improvement was very satisfactory.
When I took him to Switzerland for check-up again, the doctor couldn’t believe that I was successful and spent so much time with my son, he took me to the special needs section, and told me :
” look ! All the parents drop their children off in the morning, and leave, and ask us to do all the work, they don’t participate in the therapy. That’s why their improvement is not noticeable. But you spent so much time and involved yourself in his improvement and got reward.” the doctor injected Botox in his legs to loose and decrease the tension of his muscles. After Botox, massage was so easy for me, and my hands were more comfortable, because the muscles were not so stiffed and hard as before.
My son, changed our life. The early diagnosis and treatment greatly improved the quality of my son’s life.
Sometimes I wished to take my son to our first neurologist who told us that we should accept his limitation, and he can not live independently. He under-estimated us. He couldn’t imagine that we CAN DO IT!
Now my son is 12 years old, and he goes to the school with special education. His improvement is considerably high, he wants to be an animator.
today is his birthday. Happy birth day ERFAN!

Signup for our newsletter and get notified when we publish new articles for free!